I write you with a heavy heart.  I ask, what happened to America that respected personal Liberty?

In my view, the answer rests with the powerful elites, seen and unseen, and us.  Those pulling the levers of power in Washington and elsewhere have been chipping away at our freedoms for decades. Worse, we have allowed it.  Oh sure, we complain and rant, but their tyranny marches on trampling us – “the little people.”

The powers on high are now on speed drive. Look no further than today’s ‘Command & Control’ orders handed down by Joe Biden mandating COVID vaccinations for more than 80 million Americans.  Biden cites the use of his regulatory powers to force the unvaccinated to take the jab.  Whatever happened to our representative form of government?  You know, those folks that we elect to Congress who are supposed to propose and debate laws?  What a quaint, old fashion thought. It’s so much more efficient for authoritarians to send down decrees to the masses. Fall in line! (Biden’s Plan)

It’s About Liberty, Not Vax

I’m not anti-vax. Early on, when the vax was in short supply, I assisted many constituents in getting their vaccinations.  However, I believe each American has the right to decide for themselves the best medical options for their unique situation.  It is not the government’s job to force Americans to take an experimental vaccine that has had deadly consequences for thousands of its victims.  Of course, the elite glance over that inconvenient fact and shrug it off as collateral damage.  And please don’t claim the vax being offered is FDA approved. The approved commercial vaccine isn’t even available.  The jab being delivered is the experimental dose.

Governor Pledges Fight to the Gates of Hell

Gov. Henry McMaster nailed it late today when he said, “The American Dream has turned into a nightmare under President Biden and the radical Democrats. They have declared war against capitalism, thumbed their noses at the Constitution, and empowered our enemies abroad. Rest assured, we will fight them to the gates of hell to protect the Liberty and livelihood of every South Carolinian.“

Aiken is an Epicenter

Biden’s vax mandate hits particularly hard in Aiken County. The federal contractors at the Savannah River Site (SRS) will now move full throttle to get 100% vax compliance. Those who resist have been told they will be fired. That’s probably OK with ‘Old Joe’ because his version of freedom of choice is a bit odd – comply and take the jab or find another job.

Of course, finding another job will be increasingly difficult because Biden doesn’t stop with federal workers and contractors. OSHA will enforce a rule that requires all companies with 100 or more employees to ensure their workforce is fully vaccinated. Those who resist must undergo weekly testing.

Fortunately, many Aiken County residents are freedom-lovers.  They are rightfully resisting these Presidential edicts. It’s an organic group aptly named Aiken Citizens for Freedom.  Their first meeting drew 70 people, and a second meeting this past Tuesday brought 350 SRS employees.  They are expecting an even larger crowd at their next gathering.

As a Liberty-Loving-Legislator, I have been working with the leaders of this group as they sort out the legal minefield.  Time is short.  Terminations are likely on the horizon for those who refuse the comply.  I applaud their tenacity and conviction for following their belief in personal Liberty. (Email Contact)

Governor McMaster is correct – we must fight to protect the Liberty and livelihood of every South Carolinian. I expect South Carolina to file a lawsuit challenging the Constitutionality of Biden’s vax mandates in the coming days. Other legal options are being explored.

On the legislative front, a proposed state law (S.177) that would protect South Carolinians from being compelled to undergo vaccination for COVID passed the Senate but has yet to emerge from a House Committee. The exception would be for healthcare workers serving vulnerable populations. Regretfully, it is unlikely that the bill can emerge from the committee until the legislature returns for regular session in January.

Friends, these are perilous times.  There are those among us who applaud government mandates.  That applause will quickly fade when they realize they have forgone their precious freedoms.  Stand for Liberty!  Stand with those who are fighting for Liberty.

Can you imagine your 105th birthday?  It was my privilege to recognize Magnolia Tyler’s milestone birthday. This longtime Wagener resident now lives with her daughter closer to Aiken. I had difficulty getting with her for the presentation – she traveled to Florida for her birthday celebration with her family. This is a family with longevity. Mrs. Tyler’s mother lived to 107 and her brother recently celebrated his 104th birthday. 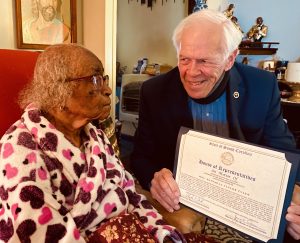