This past week, the SC House of Representatives had a singular focus – money – lots of money. Representatives debated and approved a $13.9 billion state budget that goes into effect July 1. This is just the first significant step in developing next year’s spending plan. We sent our budget to the Senate. They will make changes and send it back to the House for more changes. It’s a “process.”

For Aiken and surrounding SC counties, allocating the $525 million in settlement money from the federal 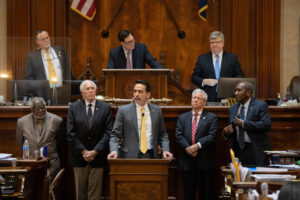 government’s failure to remove stored plutonium from the Savannah River Site is a top priority. During budget debate, the Aiken Legislative Delegation presented our colleagues the rationale for Aiken, Barnwell, Allendale, and Edgefield counties to receive a majority (if not all) of the funds. We stood with Rep. Bart Blackwell, who took the lead in providing legislators with the history of the stranded plutonium.

The legislature is far from finished in making final decisions on allocating the plutonium settlement funds. The plutonium allocation passed by the House has significantly less money coming our way, and several major projects have been left out from what the Senate proposed. Those missing projects are likely to be included in the Senate version of the budget.

The overall $13.9 billion General Fund Budget approved by the House calls for much-needed raises state employees and increases the starting pay for teachers and state-employed law enforcement and corrections officers. The House budget proposal includes setting aside $600 million of that additional revenue for the first year of a phased-in income tax cut. (Review Budget Highlights)

Pulling up to a gas pump is not a happy experience these days. Folks are wincing in disbelief. The sticker shock from 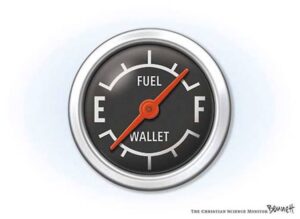 skyrocketing gas prices is challenging for those on fixed incomes or modest wages, but everyone feels it in their pocketbook. Fortunately, the gas price has begun to moderate this week but, regrettably, remains high.

There have been calls to suspend SC’s $0.26 per gallon tax to help offset the high price of gas. Gov. McMaster says suspending the gas tax would do more harm than good and setback SCDOT’s work in repairing, widening, and fixing roads, many of which have been neglected for 30 years. 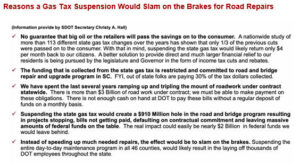 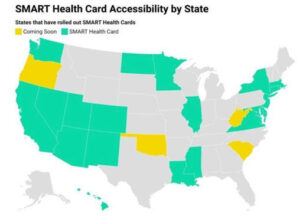 I have received quite a few inquiries about SC issuing a Smart Health Card since Forbes published and article (A National Vaccine Pass Has Quietly Rolled Out and Red States Are Getting On Board). Many fear it will eventually be a mandatory vaccine passport.

SCDHEC tells me the voluntary program pre-dates the pandemic and was initiated in 2019. Its purpose is to give people an easy way to have their vaccine list available. Specifically, parents would find it easier to provide evidence of their children’s vaccinations to schools. According to DHEC, there was no consideration for creating a ‘vaccine passport’ since that wasn’t on their pre-pandemic radar.

Given the current times and strenuous pushback on the concept of ‘vaccine passports,’ DHEC has put the South Carolina program on hold for at least six months. Before resuming, they pledged to counsel with the Governor’s office and the General Assembly. (Smart Health Card FAQ’s)

It’s election season once again. Every two years State Representatives stand for election. Wednesday, I filed to seek the Republican nomination to serve the good people of House District 86 which encompasses about two-thirds of Aiken County as well as the western portion of Lexington County. The Primary Election is June 14, and the General Election is on November 8.

House Speaker Jay Lucas (R-Hartsville) announced Thursday he would not seek re-election. He has served as Speaker 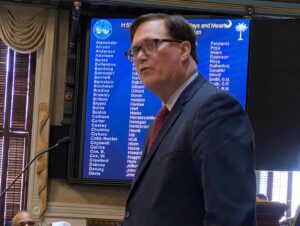 for eight years and was first elected to the legislature in 1998. Lucas has successfully navigated the legislative agenda, tackling difficult and complex issues.

A week earlier, House Majority Leader Gary Simrill (R-Rock Hill) announced his retirement after 30 years. The next Speaker of the House will likely be Rep. Murrell Smith (R-Sumter), a 21-year veteran of the House, who is currently Chairman the powerful House Ways & Means Committee. The next session’s leadership election takes place in December after the November General Election.

South Carolina got support from 21 states this week in its court battle to defeat legal challenges to the Heartbeat Bill. Those states filed an amicus brief supporting SC’s newest abortion law. The Heartbeat bill bans most abortions in South Carolina once a “fetal heartbeat” is detected. A federal district court upheld a preliminary injunction of the law. Gov. Henry McMaster then called for the Fourth Circuit Court of Appeals to review the decision.

The U.S. Senate this week gave unanimous passage to a bill that would end the twice-a-year ritual of springing

forward or falling back by an hour after 2023. It’s Sen. Marco Rubio’s Sunshine Protection Act. It would lock in next year’s switch to Daylight Saving Time in March. Rubio said the unanimous support in the Senate reflected a widespread desire by Americans to stop the ritual of changing their clocks back and forth, which dates to 1918, and a preference for daylight during later hours.

The legislation must pass the U.S. House, and if it is signed into law, SC is ready for the permanent time switch. In February 2020, Gov. McMaster signed Act 113 that would permanently lock in Daylight Saving Time contingent on the passage of federal law. 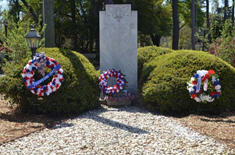 The SC Senate approved a House bill (H.3679) authorizing the Aiken County Council and the Aiken City Council to move the Vietnam Veterans Monument from its current location in the median of Laurens Street near the Post Office to the Aiken County Veterans Park about 1.7 miles away on Richland Avenue East. The bill awaits Gov. McMaster’s approval. The Aiken Veterans Council will hold a ceremony commemorating the Viet Nam War, March 29, 1:00 pm at the monument on Laurens St. 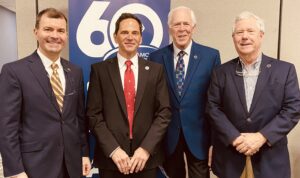 Members of the Aiken Legislative Delegation were among many who joined Dr. Daniel Heimmermann as he was installed as the 5th Chancellor in the 60 years of USC-Aiken. The Investiture Ceremony is one of the oldest traditions in academia, with roots back to the 12th Century. Chancellor Heimmermann said, “I have been impressed with the unwavering dedication of the talented faculty and staff and the university’s devotion to the region and state it serves.”

Speaker Lucas surprised legislators after the budget debate by announcing the House of Representatives will be on furlough this coming week. It’s estimated the weeklong furlough saves taxpayers about $55,000. The Senate is scheduled to be in session.

Picture of the Week 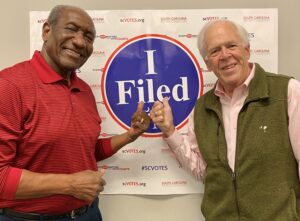 I was delighted to file at the same time as Rep. Bill Clyburn (D-Aiken), my colleague and friend.