SC’s Prosperity for All

The dust has settled on the November election, and the results produced more than a Red Wave in South Carolina. It was a Red Tsunami.

The election of Ellen Weaver to be South Carolina’s school chief is of particular importance. She is the needed change agent to lead improvements aimed at raising student achievement levels from their dismal current level while empowering parents to have a stronger voice in their children’s education.

In a historic moment, Republicans gained a super majority (71%) in the S.C. House of Representatives, increasing from 81 to 88 seats while leaving Democrats 36 seats. Most remarkable, new G.O.P. candidates flipped five seats occupied by Democrat incumbents. Democrat’s lone bright spot was in blue-dominated Columbia, where they flipped one G.O.P. House seat.

With the G.O.P.’s super-majority in the House, opportunity abounds to propel South Carolina’s success. House Republicans have joined together in the belief that the success of our state depends on five key pillars.

A top priority is to improve statewide economic development to ensure prosperity for all South Carolinians.

Reform South Carolina’s educational system, so students are better prepared for the workforce.

Law and order are top priorities of House Republicans.

Every item on the Republican agenda deserves a deeper explanation, but today, I will highlight just one.

A sinister WOKE wave crashing across America might get you ‘canceled’ or disqualify you for your next job opportunity, car, or home loan.

It is labeled E.S.G. – Environmental, Social, and Governance – and is part of the so-called ‘Great Reset’ to secure vast wealth and influence over society, corporations, bankers, and investors. It is a worldwide initiative by elites imposing environmental, social, and governance (E.S.G.) standards everywhere. The metrics measure a company’s carbon footprint, correct racial quotas, and social views among a changing list of requirements. These elites are doing what the federal government is forbidden to do to America. It’s sweeping into American financial institutions and impacting businesses large and small.

Beyond corporations, everyday Americans are next. With the stated purpose of moving the world toward sustainability and equity, new rules will tie your E.S.G. score to your ability to secure lending, obtain insurance, or a myriad of other punishments. Want an example? Research how millions of Chinese people can’t take trains and plans because of their low social credit scores.

I focused on the E.S.G. threat when I joined twenty state legislators from around the nation and policy advisors who gathered at Glenn Beck’s Dallas studio to formulate plans. There was another legislative gathering in Atlanta. But the most critical session was at the S.C. State House. 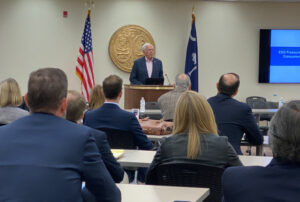 Recently, I organized and hosted a meeting of legislators, State Treasurer Curtis Loftis, Attorney General Alan Wilson, and the C.E.O. of the S.C. Retirement System. The workshop was a team effort involving every state government segment capable of pushing back on E.S.G. The nation’s brightest E.S.G. policy advisors joined us from Heritage Action and the Heartland Institute. The keynote speaker was Vivek Ramaswamy, a national rock star exposing E.S.G.

While legislation is being crafted, Treasurer Loftis has pulled $200 million from BlackRock, a mega investment firm pushing E.S.G. The Retirement System is taking away BlackRock’s proxy voting ability, so they cannot use the voting power of our retirement system’s investments to propel E.S.G. in corporations. And Attorney General Wilson is focused on potential legal action where needed.

Be assured this E.S.G. pushback in South Carolina is a multi-pronged approach, and we are all pulling together to curb this significant WOKE challenge. 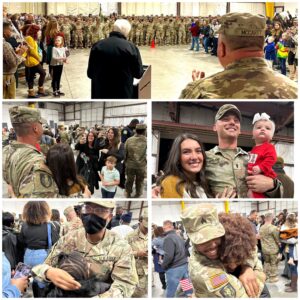 It was a Hallmark movie moment when families reunited with their SC soldiers in a flight hanger at the Columbia Airport. This company of S.C. National Guard was deployed to the Middle East for nearly a year. It was my privilege to welcome them home on behalf of the General Assembly.