This is a first – I interrupt my weekly report on S.C. legislative action to tell you about critical developments in other states. If you’re sick of an oppressive, dysfunctional federal government, this news is your antidote.

This week, two more states passed the CoS Resolution calling for an Article V Convention of States to limit federal power, spending, and terms of office. This week Wisconsin and Nebraska sent a message to Washington DC that BIG government = BAD government.

With the passage of the CoS Resolution Friday, Nebraska became the 17th state to join the national pushback, putting the Article V movement halfway to the required 34 states needed to call a Convention of States. Wisconsin passed the Resolution earlier in the week, becoming state #16. That convention would propose amendments to the Constitution to restrain Washington’s overreach. Any proposed amendment would have to be approved by three-quarters of the states.

There’s more – the South Dakota House passed their Resolution sending it to the Senate. During the South Dakota debate, Rep. John Mills said, “We can’t sit by and not speak anymore. What happens when government grows? Freedom shrinks. I want my kids to have the freedom that I grew up with, and we’re not going to get there unless we change something.”

South Carolina is poised to have its moment in history. The Senate will soon take up the Convention of States bill (H.3205) passed by the House of Representatives last May. As the primary sponsor of that legislation, I have waged a seven-year battle s 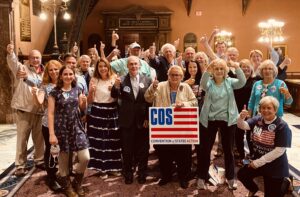 ide-by-side with grassroots warriors from across the state to win passage. Now, it’s the Senate’s turn. Is the Senate going to make SC #18 in the battle to save America?

Want to learn more about the Article V Convention of States? Here’s a brief video on my remarks before the S.C. House just before passage of the Resolution last May.

SC House committee took on the hot topic of critical race theory (CRT) in public schools this week. There was a standing-room-only crowd of citizens on hand. The chairwoman of the House Education Committee, R

ep. Rita Allison, said she wasn’t out for a “witch hunt for parents, teachers or students,” but instead wanted to make  sure children in S.C. schools get the best education they can.

Rep. Allison repeatedly said she wants to keep teaching “the good, the bad and the ugly” in history. One of the five CRT bills under consideration is H.4343; I’m the primary sponsor. The committee will begin taking public testimony on February 8. Those wishing to testify need to reserve their place on the speakers’ list by calling the committee office: 803-734-3053.

A top priority of Republicans is making certain S.C.’s elections are fair and secure – that every legal vote is cast and counted on time. SC’s 2020 General Election didn’t experience the massive problems in some other states because Republican legislators rejected Democrats’ efforts to open the election process for more online voter registration, expanded mail-in voting, unsecured drop boxes for ballots, etc.

Since 2020, the General Assembly has taken a significant stride toward increasing the integrity of our elections. The House and Senate have approved H.3444, directing the State Election Commission to standardize election procedures in SC’s 46 counties. The Senate amended the bill, and the House is slated to take up that bill again next week.

Thursday, I joined several legislators in introducing H.4882, a bill requiring the State Election Commission to develop security protocols for registration records and the use of paper ballots with security features. Other House bills need to be moved forward rapidly to prepare for the June Primary Election. Key legislation pending includes H.4620, H.4621, H.4622, H.4150, and H.3206.

Gov. Henry McMaster quickly signed legislation this week setting a new map for South Carolina’s U.S. House seats after the SC House of Representatives gave it final approval without any additional debate. The plan makes minimal changes to the seven current Congressional districts that have fairly served the state over the past decade. The House voted 72-33 on Wednesday to accept changes the Senate made last week. All the votes against the bill were from Democrats. 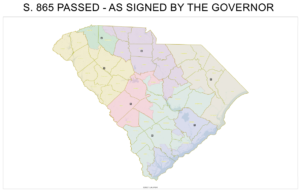 A big step to improving health care in SC. After extensive debate, the Senate voted to repeal our state’s Certificate of Need (CON) law. The sent (S.290) to the House where it will assuredly run into opposition from the hospitals who tried to derail it in the Senate. SC is one of 35 states that requires a CON if health care providers want to expand services. CON overregulates healthcare, hurts competition, and has caused healthcare to be more expensive. Getting approval from the state is one of the biggest hurdles blocking providers from adding new beds, building new hospitals, or nursing homes, or purchasing new, expensive healthcare equipment.  (Learn more from the Palmetto Promise Institute)

The Senate spent much of this past week debating the Compassionate Care Act (S.150) to legalize medical marijuana. All medical marijuana products would have to be prescribed by a licensed doctor. The bill contains a strict list of conditions that doctors can use cannabis to treat, including cancer, glaucoma, PTSD, and epilepsy. Physicians seeking to prescribe cannabis must show that the patient’s condition is within the doctor’s area of practice. Doctors would also be required to certify that they have a bonafide, long-term relationship with the patient. Proponents tout this legislation as the most highly restricted. Thirty-six states have legalized medical marijuana.

H.3464:The ‘Seizure Safe Schools Act’passed unanimously this week and helps protect students in our schools when a health crisis strikes. This bill creates a system in which schools and parents of students with seizure disorders work together to create a ‘seizure action plan’ ensuring all children are cared for correctly in the case of a medical emergency, based on their condition.

S.203: I voted in favor of a bill that ensures school district trustees who participate in misconduct, neglect of duty, conflict of interest, or are found to have other ethical violations can be removed from their position. This oversight is delegated to the office of the Governor and is necessary to ensure that all public servants are held accountable, facing the consequences for improper or inappropriate behavior.

With a ribbon-cutting Friday, Langley Pond Park became the “gem” of Aiken County parks. The 7-year project brings a state-of-the-art playground, a beach, concessions, boat ramp and docks, a grilling area, a misting pole, a vast parking lot, and more. The pond has also undergone repairs and renovations and is a world-class venue for rowing competitions. The Augusta Invitational Regatta is slated for March 12. 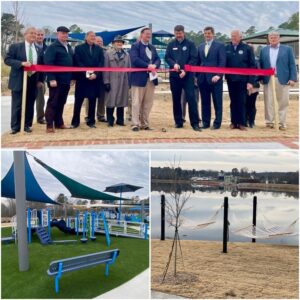 Wednesday was the Annual Carolina Day at the Statehouse. Aiken County Representatives met with Chancellor Ambassadors from USC-Aiken accompanied by new Chancellor Daniel Heimmermann. These outstanding students are excellent representatives of the university. We provided them a behind-the-scenes look at the legislative process and heard their requests for needed state funding for critical issues at USC-Aiken. 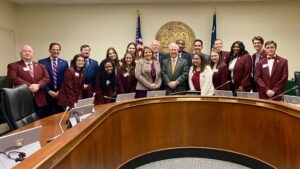