A highlight of the start of every legislative year is to hear the vision for South Carolina from its Governor. Henry McMaster didn’t disappoint this week with his call for the General Assembly to make big, bold, and transformative investments in areas of education, infrastructure, workforce, and economic development to strengthen the foundations of SC’s prosperity for generations to come. 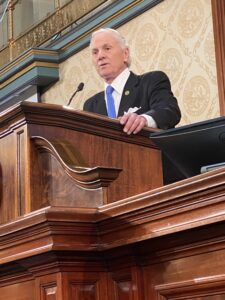 McMaster proclaimed, “During the COVID-19 pandemic, many states shuttered their economies, closed businesses, and enacted draconian restrictions, many of which continue to this very day.  We took a better approach.  We never closed.  Through our reasonable steps of limited, measured, and temporary actions, we have been able to combat the virus without crippling our economy.”

The Governor applauded the legislature’s decision to be cautious and conservative in freezing new spending in 2020 and avoiding cutting services, borrowing money, or raising taxes. That resulted in a sizeable budget surplus in 2021.

Proclaiming SC state government is in the strongest fiscal condition ever, Gov. McMaster asked legislators to spend the State’s largest-ever surplus on bold investments that drive prosperity for future generations. The highlights:

Lastly, Gov. McMaster emphasized the importance of pushing back on the Biden administration – something the House has been working to do. I join the Governor and many of my Republican colleagues in continuing to fight against unconstitutional federal vaccine mandates and many other unconstitutional infringements from Washington. I work to protect the right to life and support law and order. I join the Governor on these issues.

Put the Phone Down!

SC’s roadways moved a step closer to being safer! This week, a Senate committee voted unanimously to send the ‘HANDS-FREE & DISTRACTED DRIVING ACT’ (S.248) to the full Senate. The bill is similar to the laws in 24 other states and DC requiring drivers not to hold a phone but only use it in the hands-free mode. First fine $150, subsequent fines $300 with two points on a person’s driving record. (WACH FOX News report)

The SC Senate adopted a congressional redistricting map on Thursday. Their plan varies slightly from the version approved by the House. Unless the House concurs with the Senate’s map, which is a possibility, the chambers will now need to hash out the differences between their adopted proposals before moving forward with a single redrawn map. The redistricting plans for state senate and house seats were previously approved.

The House of Representatives honored Aiken’s Richard Pearce for receiving the prestigious Legislative Staff Award presented by the National Conference of States Legislatures. Richard is Legal Counsel to the House Clerk and a valuable resource to all Representatives. The award is for Richard’s excellence in supporting a state legislature’s work and strengthening the legislative institution through excellence and top-quality work. Congratulations, Richard! 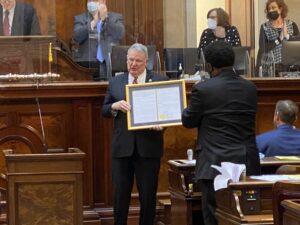