Attention legislative watchers – buckle up for what promises to be a significant and productive legislative session. The 2022 session of the SC General Assembly kicked off this past week, and we immediately focused on critical issues.

I have championed the ‘Hands-Free’ legislation to curb the distracted driving epidemic since I filed the first bill in SC in 2017. Opponents thwarted my efforts in the House, so I teamed with Sen. Tom Young (R-Aiken), who filed identical legislation in the Senate. On the second day of this session, a Senate subcommittee took a giant step toward making SC’s roads safer. Senators voted in favor of sending the ‘SC Hands-Free & Distracted Driving Act’ (S.248) to the full committee. This bill calls for a fine of $100 for holding a phone while driving. Second and subsequent offenses would bring a $300 fine.

Eyes Up, Phone Down! 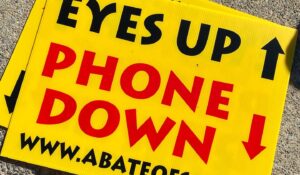 Everyone sees distracted drivers peering into their cell phone screens while driving blind and polling shows 85% of SC voters believe texting while driving is a major contributing factor to the rise in auto accidents. Motorcyclists are more keenly aware of these drivers because of their vulnerability of being run over by that carelessness. SC’s ABATE members greeted legislators on their first morning back at the Statehouse, waving bright yellow signs. I spoke to their Statehouse rally and thanked these motorcyclists for being the warriors fighting for safer driving on our roads.

Every decade following the national census, state legislators are required to redraw political boundary lines to accommodate for population shifts and ensure that everyone in our state is being fairly represented. In December, we approved redistricting plans for state House and Senate districts. The House debated and approved a Congressional plan during our first week back. The districts for SC’s seven members of Congress closely resemble the current districts in place for the past decade. (Check out the map)

SC is one of 35 states that requires a Certificate of Need (CON) if health care providers want to expand services. CON overregulates healthcare, hurts competition, and has caused healthcare to be more expensive. Getting approval from the state is one of the biggest hurdles blocking providers from adding new beds, building new hospitals or nursing homes, or purchasing new, expensive healthcare equipment. Eliminating the CON laws has been a priority of many legislators for a decade (I’m the primary sponsor of H.3161). The good news is the Senate placed their CON legislation (S.290) on special order meaning it is the first bill they considered. Senators debated the bill last week, and passage could come this week.

During the recent holidays, I wrote about legislative priorities for this session. In case you missed it, here is my best thinking on top agenda items:

The House of Representatives honored Lil Hayes on her retirement after 28 years of service to state government. Lil has been an exceptional legislative expert. Special to me was my six years working with Lil in my role as Chairman of the Higher Education Subcommittee.

GOOD NEWS! SCDOT reports it’s on schedule to open the Hwy. 302 bridge over the Edisto River in the middle of February (weather permitting). The 90-year-old bridge was closed in late 2020 when deemed unsafe. This closing and resulting detours, while necessary, have been highly inconvenient to many folks living and traveling in eastern Aiken County. The alternate routes have torn up other roads which need immediate attention.

Firefighter Family. It was a delight to join the Monetta Voluntary Fire Department “Family” for their annual meeting Saturday evening. Awards were presented for outstanding service, and they modeled their new jackets in these photos. 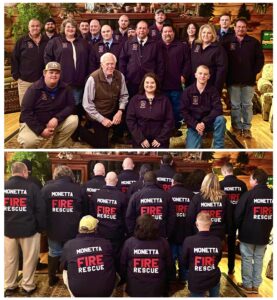 No better place to enjoy lunch than on the sunny steps of SC Statehouse! I joined students from Aiken’s St. Mary’s School during their lunch break after touring the Capitol on this first day of the 2022 legislative session. 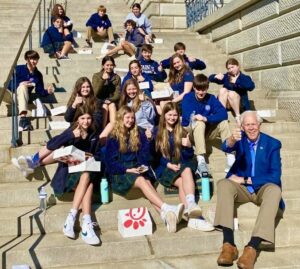