I trust you had a very Merry Christmas, and this festive time of the year is filled with family and friends and all the many blessings of our great nation.

With the New Year fast approaching, we can put 2021 in our rearview mirror and look forward to a new year with an abundance of opportunities. We live in the greatest nation in the world that offers each of us life, liberty, and the pursuit of happiness. Of course, we are not guaranteed happiness; we must find that personal satisfaction on our own. I trust you will find your joy and share it with others because happiness is more infectious than any form of the Covid virus.

It is risky to speculate on what will be forthcoming from the General Assembly in the 2022 session beginning on January 11. Legislative priorities are always fluid, but here is my best thinking on top agenda items:

I have served on various tax reform committees in the House for a decade. It has been a waste of time. We heard from tax experts and studied ways to realign, reform, and provide tax relief to citizens. We craft legislation, but nothing happens.

Meanwhile, our neighboring states are running rings around us. North Carolina has been the most aggressive in slashing taxes. The Tar Heel State began reducing its top marginal income tax rate from 7.5 percent in 2013 and just this fall, they dropped that rate to 3.99 percent over the next six years. South Carolina’s top income tax rate remains at 7 percent.

Our neighbor to the north has also reduced its corporate income tax rate dramatically and is running rings around us. This hurts South Carolina’s growth in recruiting business and industry. Our high-income tax rate is not only unnecessary and unfair, but it also places a barrier to folks choosing to locate from other states. Why would they want to go to a state that takes a huge chunk out of their paycheck?

How does South Carolina rate against its major competitors in the Southeast? Not well. The Tax Foundation’s just-released Business Tax Climate Index rates South Carolina #33 among all states for individual taxes. North Carolina ranks #16, and Tennessee is #6.

We can do better! We have been studying the issue for a decade. We know how to reform and reduce taxes while stimulating the economy. The only thing missing is the will to do it. With two-thirds of the South Carolina House and Senate controlled by Republicans, there is no reason we can’t pass significant tax reform yet this session. That would truly make 2022 a Happy New Year!

I took a group of Aiken Boy Scouts on a behind-the-scenes tour of the Statehouse a few days before Christmas. The Scouts, from Troup 115, got a huge surprise as we wound up the tour. Gov. Henry McMaster and Lt. Gov. Pamela Evette greeted them and posed for a picture. The state’s two top officials’ welcoming them, was the icing on the cake for the Boy Scouts as they pursue their Citizen of the Nation requirement. 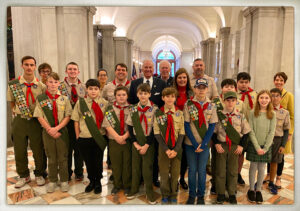