My cell phone rang Wednesday at 3:08 p.m. while I walked the halls of a nursing home after visiting a patient. It was the call I had been waiting for nearly a week and worked toward since December 2013.

It was Gov. Henry McMaster calling. I rejoiced at his first words: “Bill, I just signed your bill.”

A moment earlier, with a stroke of his pen, Gov. McMaster signed H.3205, the Article V Convention of States Resolution, making SC the 19th State, joining forces with other states in pushing back against our overreaching federal government.

I told news reporters, the message was clear – “Hello, Washington, we’re coming to fix you.”

Click here to read the Governor’s letter that provides a powerful explanation of his reasons for signing the Resolution.

The bill calls for a convention of states, as outlined in Article V of the U.S. Constitution, which allows for two paths to propose amendments to the Constitution: by request from two-thirds of both houses of Congress or by request by two-thirds of the states. We are more than halfway to having the needed 34 states. 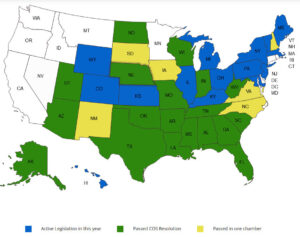 I filed this legislation in December 2013, making South Carolina the first State in this current movement to call for an Article V Convention to propose limits on the federal government. Perseverance counts! Every session, there were legislative hearings, but success was elusive. I continued to refile the legislation with each new session.

While I pressed ahead with others, Washington printed money and nearly doubled the national debt, now topping $30 Trillion (U.S. Debt Clock). Simultaneous over those nine years, whether Democrats or Republicans controlled Washington, the federal government expanded its authority and control, robbing Americans of our God-given liberty. 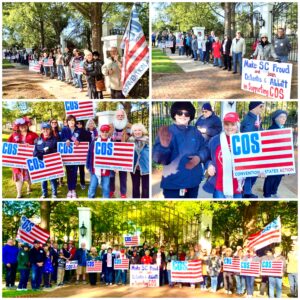 This legislation would have never won passage had it not been for the citizen activists across South Carolina. Nearly 50,000 South Carolinians have signed the petition calling for this legislation, while scores of the most dedicated volunteered daily. The Convention of States Project team comprises everyday Americans volunteering their time and talents.

They are happy warriors, not an angry mob protesting and demanding. They formed relationships with legislators and advanced support of CoS by explaining the process and necessity of the Article V movement. They were at the Statehouse regularly through all those years. They finished strong; while the Governor was contemplating signing the bill, dedicated CoS patriots showed up at the Governor’s Mansion last Saturday morning to encourage him to sign the bill.

While I am the primary sponsor of the CoS Resolution, I was not alone. There were many Representatives and Senators who cosponsored this legislation and worked to push the bill forward successfully through the legislative gauntlet. I owe these colleagues my utmost gratitude, for, without them, South Carolina would not be #19 on the road to 34 states to propose fixes to our federal government that they will never do to themselves. 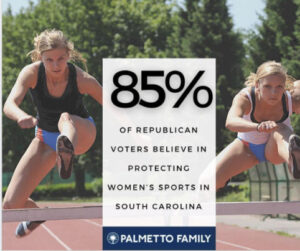 The House voted 82-28 to pass H.4608, Save Women’s Sports Act and sent it to the Senate. House Democrats crafted nearly 1,000 amendments meant to derail the legislation. House Republicans fought to outlaw the participation of biological men (who identify as women) in women’s sports throughout grades K-12 and our public colleges and universities. It’s simple and sensible – athletes should only participate on sports teams that correspond with the gender on their birth certificates. Women should be able to participate in sports with a competitive edge and feel both comfortable and safe. Fourteen other states have passed similar legislation.

Another hot topic is Critical Race Theory, which teaches that people of a particular ethnicity or race should be held responsible or blamed for past oppression of other races. A bill to outlaw CRT from being taught in SC K-12 schools is on the House floor, ready for debate. It faces over 200 amendments from the Democrats seeking to kill the bill. Due to the number of amendments, House Republicans decided to cloture the bill – ensuring no more amendments aimed to derail the bill could be added. When we return to the legislative session this coming week, we will continue the debate on CRT.

I look forward to passing a bill to outlaw the curriculum.

I also remind you that this year’s budget protects against Critical Race Theory being taught by ensuring no public funds can be used for CRT instruction. I hope the Senate will adopt these protections in their budget, too.

The Senate amended House legislation that prevents state and local governments and school districts in SC from requiring employees, first responders, or students to take the COVID-19 vaccine. The bill passed in a 29-12 vote. The Senate removed an unemployment insurance tax surcharge for businesses that fire employees who refuse to take the COVID-19 vaccine. However, the bill allows an employee fired for not taking the vaccine to be eligible for 20 weeks of unemployment insurance benefits. Businesses would need to honor medical and religious exemptions if they impose a vaccine mandate, and a company also can’t force a subcontractor to impose a vaccine mandate. Businesses also would not be allowed to require customers to be vaccinated. The House will consider the changes made by the Senate before the legislation can be sent to Gov. Henry McMaster.

With time running out on this legislative session, the Republican-led Senate is expected to take up broad election reforms spurred in part by the 2020 election results. The bill (H.4919) was passed by the House earlier and will be considered by the Senate this coming week. The legislation calls for two weeks of early in-person voting and limits the excuses for mail-in voting. The bill also calls for regular and routine audits of ballots to confirm the integrity of elections conducted on the state and local levels.

The Compassionate Care Act, also known as the Medical Marijuana Bill, passed out of the House 3M committee and will likely be debated on the House floor during the next couple of weeks. The bill (S.150) originated in the Senate, and if approved by the House and signed by the Governor, South Carolina would be the 38th State to legalize medical marijuana. South Carolinians with certain conditions, such as cancer, epilepsy, or terminal illnesses, could be prescribed certain forms — oils, vaporizers, salves, lotions, creams, and patches — and amounts of marijuana if authorized by a doctor. Medical marijuana would be available only at specific pharmacies. Smoking marijuana and its recreational use would still be illegal.

Return to Work for Law Enforcement

I voted in favor of a bill that expands the earnings limitation on retired SC police officers who desire to return to work. We need their experience keeping us safe. The legislation increases the amount that may be earned without affecting the monthly retirement allowance from $10k to $50k for certain retired members. This legislation passed the House unanimously, making the crossover deadline, and now must be approved by the Senate.

The House voted 113-1 to slice the size of the University of South Carolina board of trustees from 20 to 13 and throw all the incumbent board members out at the end of June 2023. Legislators are irked with how the USC board has handled multi-million-dollar buyouts for athletic coaches and the bungled 2019 presidential search. The legislation (H.5198) also eliminates judicial circuits for board member representation. Instead, the legislature would elect seven members from the State’s seven U.S. congressional districts and four at-large seats that represent counties of the State where the university has campuses. Under this plan, Aiken County would be guaranteed one Trustee. A similar overhaul bill is stalled in the Senate.

The legislature is constantly working to improve the lives of those who served our country, including lowering their tax burden. This year, the House voted to exempt veterans from state income taxes. Just before our Easter recess, we gave third reading to a bill that exempts disabled veterans from property taxes for the year the disability occurs to allow them to get back on their feet.

You might have noticed retailers around the State displaying a sign advising people over the age of 85 that they qualify for a 1% sales tax exemption. The House unanimously voted to lower the age-eligible for this exemption to 78 and older. This bill earned bipartisan support and helps to reduce the tax burden on one of the most vulnerable populations in our State.

Each year the General Assembly passes tax conformity legislation ensuring that the State and Federal tax codes align. This is an important bill to ensure our state rules match the Federal government when you file your taxes 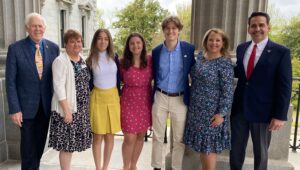