Cha-Ching in Your Pocket

Cha-Ching! That is the sound of money in your pocket.

In a historic vote, the SC legislature voted to provide taxpayers more Cha-Ching this week. The new state budget returns $2 billion to citizens because of SC’s strong economy and record revenues the state has experienced. Given today’s shaky economy with sky-high inflation and prices, the Cha-Ching will be a welcome sound to South Carolinians.

Because of unwise decisions by Washington’s political elite, we all recognize recession headwinds are blowing up a storm. That’s why legislators were wiser and more prudent. This budget goes to extraordinary lengths to protect state finances. In an unprecedented move, more than $1 billion has been sent to the “rainy day” fund or designated not to be spent.    Those savings total 11% of this state budget that is saved and not spent!

The budget is now on the desk of Governor Henry McMaster. We await his approval, as well as line-item vetoes. 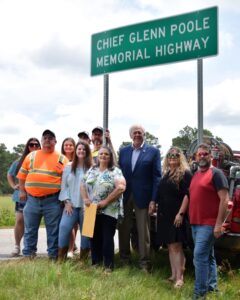 Family and friends of the late Glenn Poole gathered to memorialize his decades of public service by dedicating a roadway in his name. For many years Glenn served as the Fire Chief of the Hollow Creek VFD (I jokingly referred to him – as the “Mayor of Hollow Creek”). Sadly, he passed away in January. In his honor, Hollow Creek Road east of Perry gained an additional moniker — ‘The Chief Glenn Poole Memorial Highway.’ I was honored to sponsor the legislative Resolution authorizing the tribute with this SCDOT signage.

Hooray for the New House Speaker

Friends and supporters of Rep. Murrell Smith, the newly elected Speaker of the SC House of Representatives, gathered in his hometown of Sumter last week to celebrate his election to that leadership post. 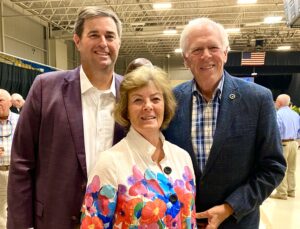 The split of the SRS Plutonium settlement money was approved along with the state budget. The Budget Conference Committee worked out differences in the House and Senate versions last week.

Aiken and surrounding counties will receive $343 million. That totals 70% of the $525 million settlement with the federal government for their failure to move stored plutonium from the Savannah River Site as agreed. That amount distributed locally is more than anticipated. The remainder of the settlement goes to the SC Ports Authority to complete the Navy Base Intermodal Facility infrastructure project. The port is an economic driver for the entire state.

Hat’s off to all the local leaders who collaborated on creating a meaningful list of projects that benefit education, jobs, and health services with this windfall of money to provide a long-range impact on our area.

WARNING: PROUD GRANDPARENT ALERT!  My wife, Donna, and I have three lovely granddaughters, but this week brought a milestone. Our only grandson, Heath, had a cake-smashing good time at his 1st birthday celebration! 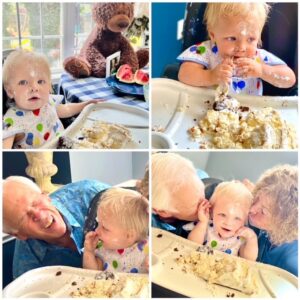