My weekly report is filled with significant developments at the Statehouse. Still, as important as those issues are, they are overshadowed by the war in Europe that saw the most extensive military invasion since Adolf Hitler swallowed Poland in 1939.

The Consequences of War 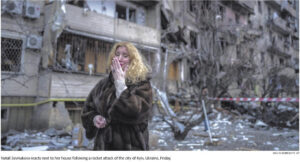 The consequences of Russia’s invasion of Ukraine are enormous on multiple fronts. Foremost, Ukrainians are dying, some fighting and others fleeing with their families, leaving everything behind to save their lives. If Russia prevails, which is likely, freedom will be stomped, and that nation’s fledgling democracy will be replaced with a puppet government reporting to Moscow. Meanwhile, the possibility of a broadening war is very real – it only takes a spark.

Here at home, the consequences of the war were readily visible as gas prices shot up within hours of the invasion and the turbulence in the financial markets. A mere two years ago, America was energy independent. Because of the Biden Administration’s ruthless quest for green energy, we are now dependent on imported oil. Biden killed the Keystone XL pipeline and slashed oil production, ending our national status as a net energy producer inviting Russia to become the second-highest oil exporter to the United States. But Biden’s most significant gesture to Russia was to reverse Trump’s sanctions on Putin’s Nord Stream 2 pipeline — Russia’s cash cow conduit to Europe.

A weak and inept American president has greenlighted Vladimir Putin’s aggression. Does anyone believe this invasion would have happened if Donald Trump were President? Some Americans didn’t like Trump’s mean Tweets, but he kept Putin and other aggressors at bay. Biden mostly talks, and his Russian sanctions are too little, too late, and ineffective.

Political commentator Victor Davis Hanson summed it up this way, “Putin never knew quite what Trump would do in any given crisis, other than it would be unpredictable, in U.S. interests, and possibly deadly. Speaking softly while carrying a big club rather than loudly with a twig better persuades Putin not to try something dangerous.”

Please pray for the people of Ukraine.

This week, the SC House voted unanimously to cut the state income tax by $1 billion. The unanimous 110-0 vote shows that both Democrats and Republicans can join forces to strive towards a common goal – to make SC a better place to work, live, and raise a family. Here’s what you need to know: 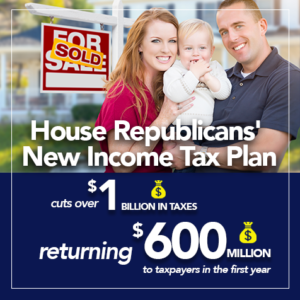 What changes? For background, the Palmetto State currently pays an effective income tax rate of 3.1%–lower than Georgia’s 3.7% effective rate and North Carolina’s 4.1% effective rate. With this bill, we could lower that effective rate to 2.54%. We are doing this through a new simplified two-rate income tax system. Our current system includes six different complex and outdated tax brackets, but our plan collapses those brackets into just two rates: one at 3% and one at 6.5% after one year. The maximum tax rate also would gradually be reduced to 6% over five years, so long as conservative planning and budgeting persist.

How can SC afford to make taxes so low? Years of conservative budgeting and planning have allowed our state to have a historic amount of surplus funds. Rather than spend this money, it is being returned to the hardworking taxpayers of SC.

Who is affected? If you pay more than $11 in taxes, this plan cuts your taxes. Significantly, it raises taxes on nobody. Our new plan prioritizes cutting taxes for working, middle-class families. South Carolinians earning less than $25,000 will see, on average, a 25% tax decrease upon full implementation. 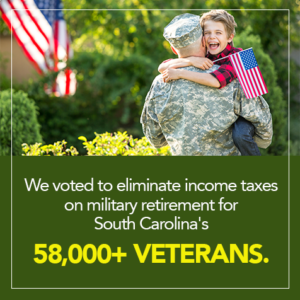 Do Veterans Benefit? This legislation proposes to end income taxes on military retirement for our 58,000+ veterans residing in SC. This is a way of saying thank you for their service and making it easier for veterans in other states to say YES to SC.

The House voted to spend millions of dollars to improve, expand and repair the condition of our state’s infrastructure. The House passed the ARPA Funds Appropriations Bill, which outlines how we will spend federal dollars, including but not limited to:

Saving for the Rainy Day

The House unanimously voted to pass H. 3346, which will increase our state’s reserve funds, often referred to as ‘rainy day funds’ here in Columbia. Currently, our general reserve fund equals 5% of the total general fund revenue (revenues from taxes, fees, interest earnings, etc.). The increase will slowly raise the percentage by 0.5% until our fund is 7% of general fund revenue.

The bill also increases our Capital Reserve Funds (funds that can be spent if needed for deferred maintenance or later put in the General Reserve Fund) from 2% to 3%, with SC at 10% savings per year. This reserve fund increase will take effect upon ratification of an amendment to our State Constitution. I was proud to support this legislation because being economically cautious is fundamental to ensuring our economy is prepared for financial adversity or economic uncertainty down the road.

House budget writers have worked for months to craft next year’s state budget that we will be debating in a few weeks. We are proud that we will incorporate new raises for several core workforce groups throughout SC this year. The past few years have given us renewed respect for our teachers, law enforcement officers, and state employees. Because of the wise allocation of state dollars, we can show our appreciation to our teachers, law enforcement officers, and state employees by proposing significant pay raises.

Here are the essential items being proposed for this year’s House budget:

Teachers: SC faces an unprecedented teacher shortage, only to be made worse by the pandemic. More teachers are leaving the profession. To help mitigate this, we include the following in our budget proposal:

State employees: Our state employees have always been a huge asset and have proven to be fundamental over the last two years. They continued to work hard and face the challenges brought by the pandemic. In this budget, we have recognized their hard work and dedication by including the following:

House budget writers approved their version of how they want to spend the $525 million from the settlement money from the federal government’s failure to remove stored plutonium from the Savannah River Site on time. For the past 18 months, the Aiken Legislative Delegation has coordinated with local officials to secure a sizeable share of those funds for Aiken and other impacted counties surrounding SRS.

The House version of the settlement was disappointing. No, it was shocking. It calls for sending 57% ($302 million) of the monies to Aiken, Barnwell, Allendale, and Edgefield Counties. The Senate plan gave 69% ($363 million) to those counties. The surprising big winner in the House version was the Port of Charleston, receiving 43% of the settlement. Proponents of the plan contend the port helps every county in the state.

The significant reduction in spending came from Aiken County, which lost over $71 million compared to the Senate version. Among the top losers were the elimination of nearly $10 million for Aiken Tech’s much-needed nursing school building and almost $30 for the Whiskey-Powderhouse connector road. (See comparative list)

This is far from a settled issue. Aiken County legislators will continue to strongly advocate for more dollars coming to Aiken County, particularly when a House-Senate conference committee negotiates the differences in the plans. Stay tuned.

Finally, there has been positive movement on the Hands-Free legislation that would require drivers to put down 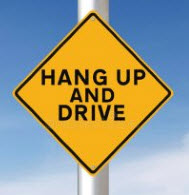 their phones and focus on driving. The Senate passed S.248 with a decisive vote of 37-3. Drivers caught holding a phone would face a $100 fine for the first offense and $200 and two points on their driving record for each additional offense. Sen. Tom Young led the successful effort in the Senate. It’s now my turn. As the primary sponsor of the Hands-Free bill in the House, it will be my challenge to champion his legislation through the House, where my earlier Hands-Free bills have met stiff resistance from some attorney/legislators. 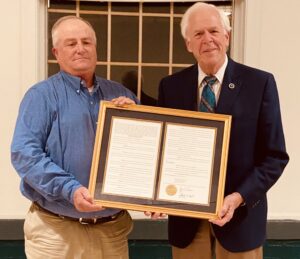 We remembered Mayor Bob Salley at the Salley Town Council meeting this week. ‘Mayor Bob’ passed away last year at 94 after serving as Mayor for more than 24 years. Every day he quietly showed his public service to the citizens of Salley — no task was too big or too small. A veteran of WW2 and Korea, ‘Mayor Bob’ was truly a member of The Greatest Generation — a remarkable and unforgettable man. His son, Councilman Paul Salley, accepted a Resolution from the SC House of Representatives honoring his father.

This week, I welcomed to my Statehouse office the FFA students from Ridge Spring-Monetta High School led by Michael Crim & Haley Moore. These AG students are the future of our farm-to-table sustainability. Smart Farmers = Good Food!

Did you know? FFA is not just for students who want to be production farmers. FFA welcomes those who aspire to be teachers, doctors, scientists, business owners, and more to reflect the growing diversity and new opportunities in the industry of agriculture. 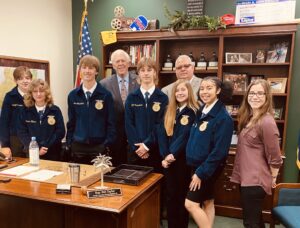