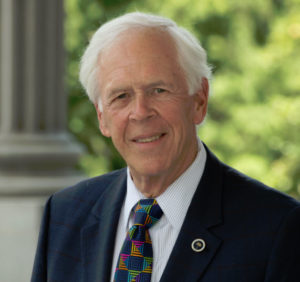 He currently serves as Chairman of the Higher Education Subcommittee of the House Education & Public Works Committee.  Additionally, Bill serves on the House Legislative Oversight Committee charged with inspecting and investigating state government.  He has chaired and served on numerous Ad Hoc Committees including the Tax Review Committee appointed by Speaker Jay Lucas in August 2016.

Nationally, Bill proudly served as a consultant to the George H.W. Bush White House in ’91-92.

Bill is a former television reporter, producer, anchorman and news director. For more than three decades he was an entrepreneur and media consultant/critic. During his career he advised broadcast and cable networks, Hollywood studios, and scores of local TV stations, as well as newspapers and web developers.  He co-founded a media consulting firm that eventually grew into a family of companies stretching from Dallas to Los Angeles and London.

Active in his community, Bill serves on the Advisory Board of the Salvation Army in Aiken. He is a past Chairman of the Aiken Chapter of the American Red Cross, where he served on the Board for nine years. As part of his personal mission work, Bill created the Emergency Mobile Shower Unit which provides free showers to first responders and disaster victims as it did during Hurricane Ike in Texas. In 2015 he donated the shower unit through the S.C. Baptist Convention where it is still in active service.  As a member of Millbrook Baptist Church, he has been on international and domestic mission trips.  He made four trips to Mississippi and New Orleans repairing damaged homes after Hurricane Katrina. Another mission trip was to Joplin, MO after the devastating 2011 tornado. He also went on a church mission trip to Cuba in 2012.  Bill has been a 32 degree Mason and Shriner for more than 50 years. He is a member of the Aiken Rotary Club is actively involved in a wide variety of other Aiken County activities. 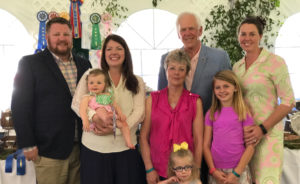 Bill and his wife, Donna, are celebrating their 50th wedding anniversary in 2020.  Donna is Vice President, Associate Broker and REALTOR® at Meybohm Real Estate, Aiken.  They have two adult children. Daughter, Kasey Taylor Lenz, who is a REALTOR® in Hartsville, SC and a wonderful mother to their grandchild, Avery. Kasey is married to William Lenz.  Son, Ryan Taylor, a USCA graduate, has a Master’s in Counseling from Liberty University and he returned to USCA to earn his MBA in 2017.  He is the Executive Director of the Nancy K. Perry Children’s Shelter in West Columbia, SC. Ryan is married to Jackie Heath Taylor.  They live in Lexington and are terrific parents of two children, Laurel and Lydia.

The Taylor’s live in rural Aiken County and previously owned and operated a 66 acre horse farm in the northeast part of Aiken county.